So I'm sure many of you (of the nine who follow this blog) have seen the energy drink commercial that shows the "security camera"  video of the woman who walks out of the coffee shop into a closed door and spills her coffee all over herself. The announcer asks the rhetorical question, "Has this ever happened to you?" Then he proceeds to tout the solution to this universal problem of walking into closed doors with your coffee: Chug back your caffeine in one shot, using the 1.93 oz energy drink.

But I was thinking, my problem with drinking caffeine the conventional way has never been a tendency to walk into closed doors. Rather it's been burning my tongue (which is why I prefer iced coffee). The caffeine shot is a solution to a false problem. And besides, in the video, she was texting while walking. That was the problem. And slamming back caffeine shots wasn't the solution to that.

Marketers use the false problem all the time to hawk spurious features.  When I first met my then-future-ex-wife, she was a copywriter at another ad agency, working on an ad for some new Sony wireless speakers. The idea behind this transitory technology was that you didn't need old-fashioned wires to hook up your speakers to your entertainment system; they'd connect via radio signal. The client insisted that the true benefit of this new technology was not that you didn't have to crawl behind your furniture to hook up your entertainment system, it was that the  propagation of the signal from the amplifier to the speaker was imperceptibly faster via radio signals (the speed of light, 186,000 miles per second) than by electrons moving down a copper wire (oh, a little slower than the speed of light). So, following the creative brief, Cheryl offered the headline:

"Tired of waiting for your sound?"

This is how I fell in love with her (well, that and her Cajun meatloaf). The client loved this, too. It expressed the product benefit exactly. People were tired of waiting for their sound. "Where was that sound? I turned this thing on nanoseconds ago and my sound still isn't here!" And it followed the principle of advertising that you always solve the customer's problem. Even if it isn't a problem.

Politicians are masters of generating the false problem. Currently the false problem in this election is budget deficits. And everybody's trying to fiscally out-austere each other. Of course we've had budget deficits since the founding of this country. Every sovereign nation with its own currency has. That's how the economy grows. It's like buying your house with a mortgage. If everybody had to wait until they saved enough to pay cash for a house, nobody would.

But suddenly deficits are a problem. A false problem. And politicians are making everyone as agitated about them as if they had just downed six 5-Hour Energy shots. So we have to slash spending; fire millions of government workers; make people suffer. And other people's suffering will give investors confidence. Somehow. Don't worry about the details; they're technical. Just trust me. I'm a pundit.

Before that the false problem was voter fraud, even though the bona fide incidents of actual voter fraud in the entire history of record keeping have been countable on one hand. So state legislatures have been hysterically enacting voter-fraud prevention measures whose draconian solutions will be worse for millions of legitimate citizens than the false problem.

False problems are generated by lazy minds. In marketing (and all elections are marketing campaigns, too) the false problem is kicked into a brainstorming session by somebody who's tired and just wants to go home (see my post on Brainstorming). So they write it up on a white board and everybody, who haven't had their 5-Hour Energy blast in eight hours, looks wearily at it and says, "Yeah, that looks good. Let's go with that."

See how easy marketing is?

Now buy our book! The Unbreakable Rules of Marketing. It will cure that problem you've had with the urge to stick your tongue to a frozen pipe.

Posted by Jeff Berry at 7:27 PM No comments:

Our Book is Born! 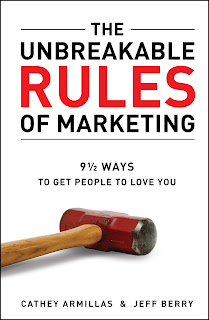 After 18 months of gestation, Cathey Armillas and I have delivered forth a book. Weighing it at about 1 lb 2 oz, we've named this little bundle of joy The Unbreakable Rules of Marketing: 9 1/2 Ways to Get People to Love You.

It would be mere marketing hype to say that this slim, easy-to-read, no-big-words volume would change your life. So I'll say it. It will change your life. Not like The Secret was supposed to change your life. But it will make clients seek you out even if you're on page 17 of a Google search. It will make customers line up at your store before you open. It will make objects of your affection fall in love with you, registered voters vote for you, adversaries bow down to you, people you barely know invite you to parties, and your dog lick your shoes. (Your dog probably licks your shoes anyway, but no matter; he will like you all the more if you read this book.)

Who's it written for? Everybody. Not just marketing professionals. In fact they are probably the least likely audience, because you'd think they'd already know all of these unbreakable rules. They are so fundamental that they've undoubtedly forgotten them. And, come to think of it, given the state of marketing lately, a lot of them have.

Okay, okay, so what are the 9 Unbreakable Rules of Marketing?

What do these mean? Read the book.

You may purchase it either on Amazon's or Barnes & Noble's fine online establishments. Now.

Did I mention it's supposed to be funny?
Posted by Jeff Berry at 1:08 AM No comments: