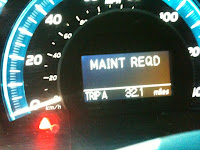 Don't you hate it when someone  e-mails you and cryptically says, "There's something I want to talk to you about. When's a good time?"?

No conversation should ever be preambled this way. Just come out with it. Dammit.

And if the "something" was insignificant, like wanting to know if they can catch a ride to work with you next week, you are doubly pissed, especially if you've endured a sleepless night with your febrile imagination having its hairy way with you: What if I am adopted?

So, the other day, my own car did that to me. It told me I was adopted. No, it just got me all excited for no reason.

I'm heading back up to Portland after a road trip to LA and stuck in rush hour traffic on I-5. Suddenly, crawling along at 1 mph, the "Message Center" on my dashboard lights up, "MAINT REQ" accompanied by an ominous little exclamation point in a red triangle, the kind of symbol that notifies you the nuclear core's going to melt down in sixty seconds.

It's never done this before. I can't exactly pull out the owner's manual in the middle of accordion LA traffic and flip through it to find out what MAINT REQ means. The red triangle doesn't look like something good. Does it mean I need to pull over right away (across six lanes of hostile traffic)? I push the emergency "find" button on my GPS and it directs me to the closest Toyota Dealer--in that Heart of Darkness, South Central LA. My car is evidently trying to kill me. I can't go there, not at this time of night. So, fighting panic, I call an old friend in San Marino and slowly make my way to the safety of her house, my senses on edge for other warning lights and telltale smells coming out of the vents.

The car seems to be running fine, though. In half-an-hour I make it uneventfully to my friend's house and finally pull out the owner's manual. It says "MAINT REQ" simply means to take your car in for service as soon as possible. Thanks. Not helpful.

While I'm in my friend's kitchen, her son comes home and I tell him what's happened. He has a Toyota as well and says, "Oh, that happened to me.  Just means it's time for an oil change or something. They program it in there to get you to come in for regular checkups, where only they know how to turn it off."

In other words; it's a marketing gimmick. A trick to get me all excited about scheduling an appointment so they can keep their service department in business, but a trick that had the unintended consequence of wondering if I was going to die another senseless death in Quentin Tarantinoville Compton.

This is where marketing really gets irritating. Bad enough that it clogs your inbox and mailbox. Bad enough that it interrupts your TV show. Bad enough that it pops up on your monitor with the false alarm that your computer is infected with a virus that only the originator of this pop-up can take care of. It also has to panic you into doing something stupid, like driving six miles into South Central LA in the middle of the night to find an Authorized Toyota Dealer...who isn't open anyway.

But, you have to admit, it's brilliant.

I drove home instead, all 960 miles. The red triangle light is still blaring and I'm still being told that maint continues to be req. I'll take care of it next week. If I can brave driving into the Heart of Darkness that is Beaverton.
Posted by Jeff Berry at 12:55 PM No comments: